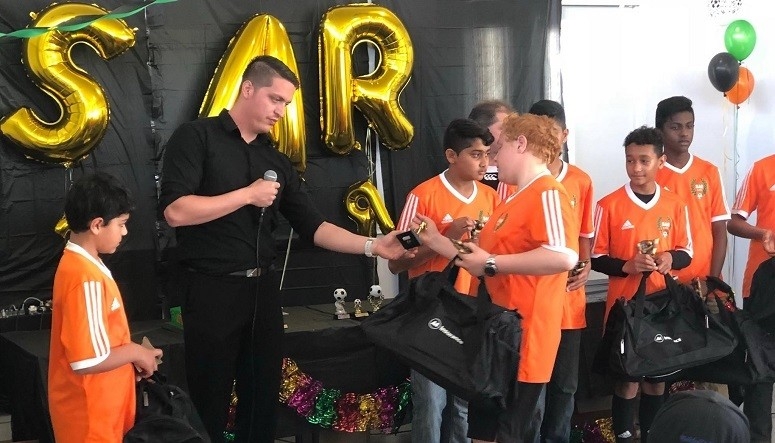 When you only have seven kids to make a full soccer team, instead of 11, things can be a little tough. Add to that a shortage of volunteers and coaches, and the financial strain of a club that’s endured multiple break-ins and thefts, and it could all seem too bleak to go on.

But when your passion for the sport remains as strong as your community support the adage, ‘where there’s a will there’s way’, continues to ring true.

This is the type of spirit that impresses the Make A Difference committee at AA Insurance. So, when they heard about the hard times experienced by the South Auckland Rangers Titans - a soccer team for 12 to 13-year-olds in Otara – they wanted to give them a financial hand.

The team had been nominated for sponsorship by an AA Insurance staff member. She had heard from one of the club’s volunteers that the team had worked extremely hard last season to improve their game - from 15-0 losses to draws and 1-0 wins. However, they didn’t always have the same resources and opportunities as other clubs so were trying to fundraise for a prize-giving to celebrate that hard work and success.

Fast forward to the end-of-season prize-giving ceremony. As families, friends, coaches, trainers, club owners and sponsors gathered to celebrate the club’s achievements, AA Insurance was there too, to officially present the new trophies and training gear it funded for the club.

One AA Insurance staff member said it was a particularly insightful day – hearing about the hardships of the season and how many of the teams, including the Titans, had triumphed with the support of family, friends, and volunteer coaches and trainers.

As a specific treat for the Titans, the entire team - which had grown from seven to 10 over the months - was shouted to a special end-of-season outing at an escape room adventure. The kids had an amazing time and it was a great opportunity for them to bond outside the club. The perfect end to a triumphant season.